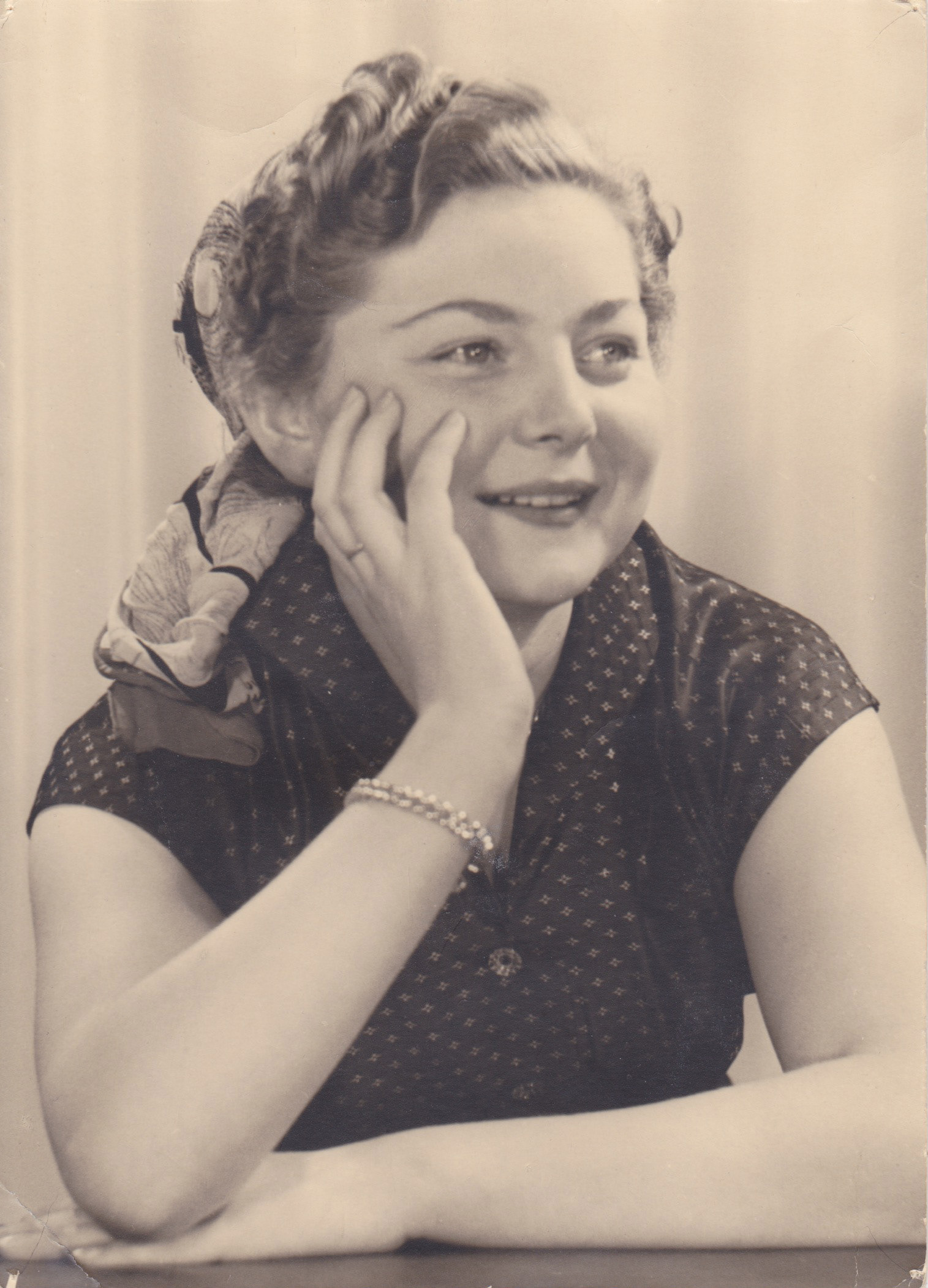 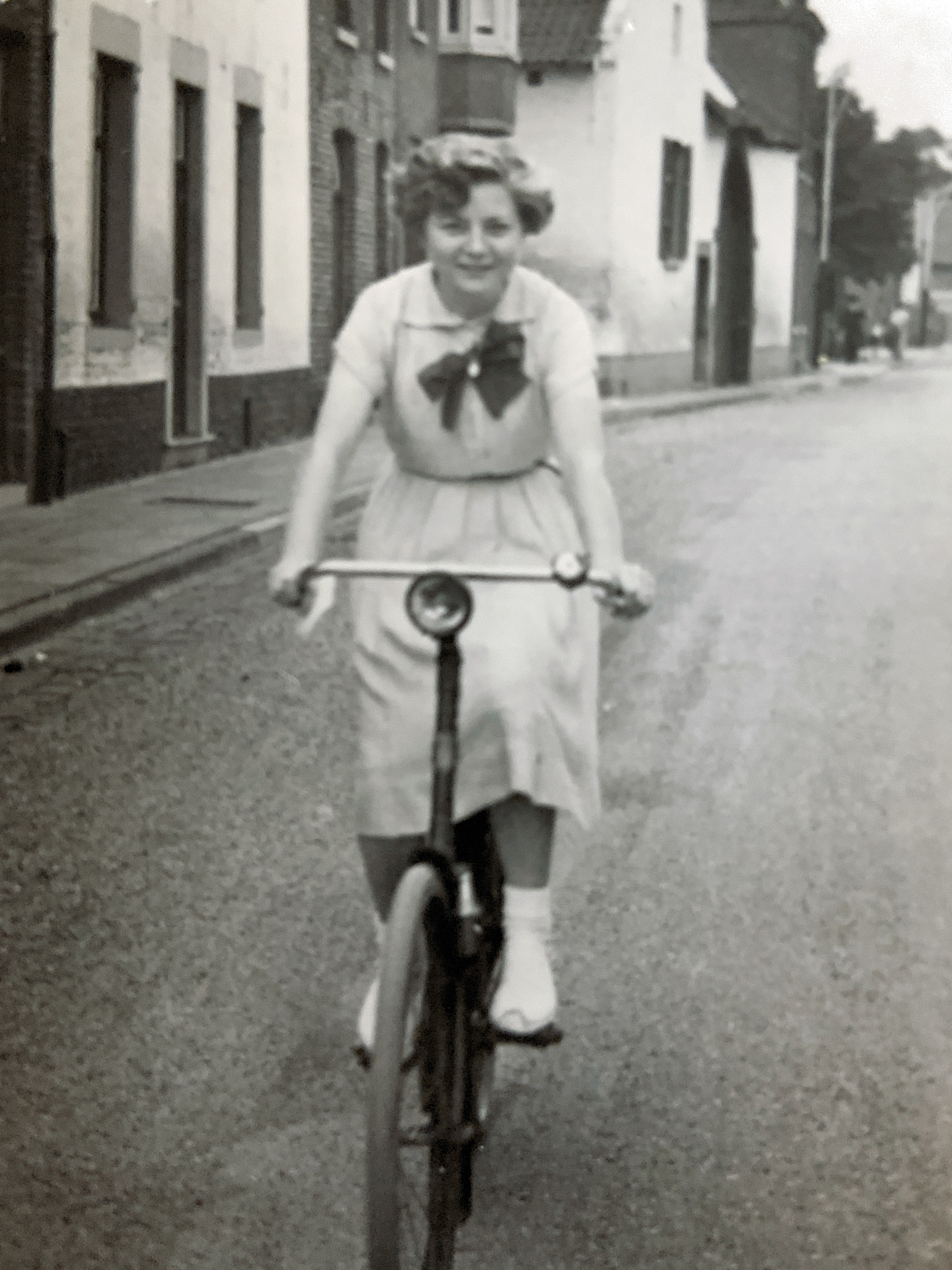 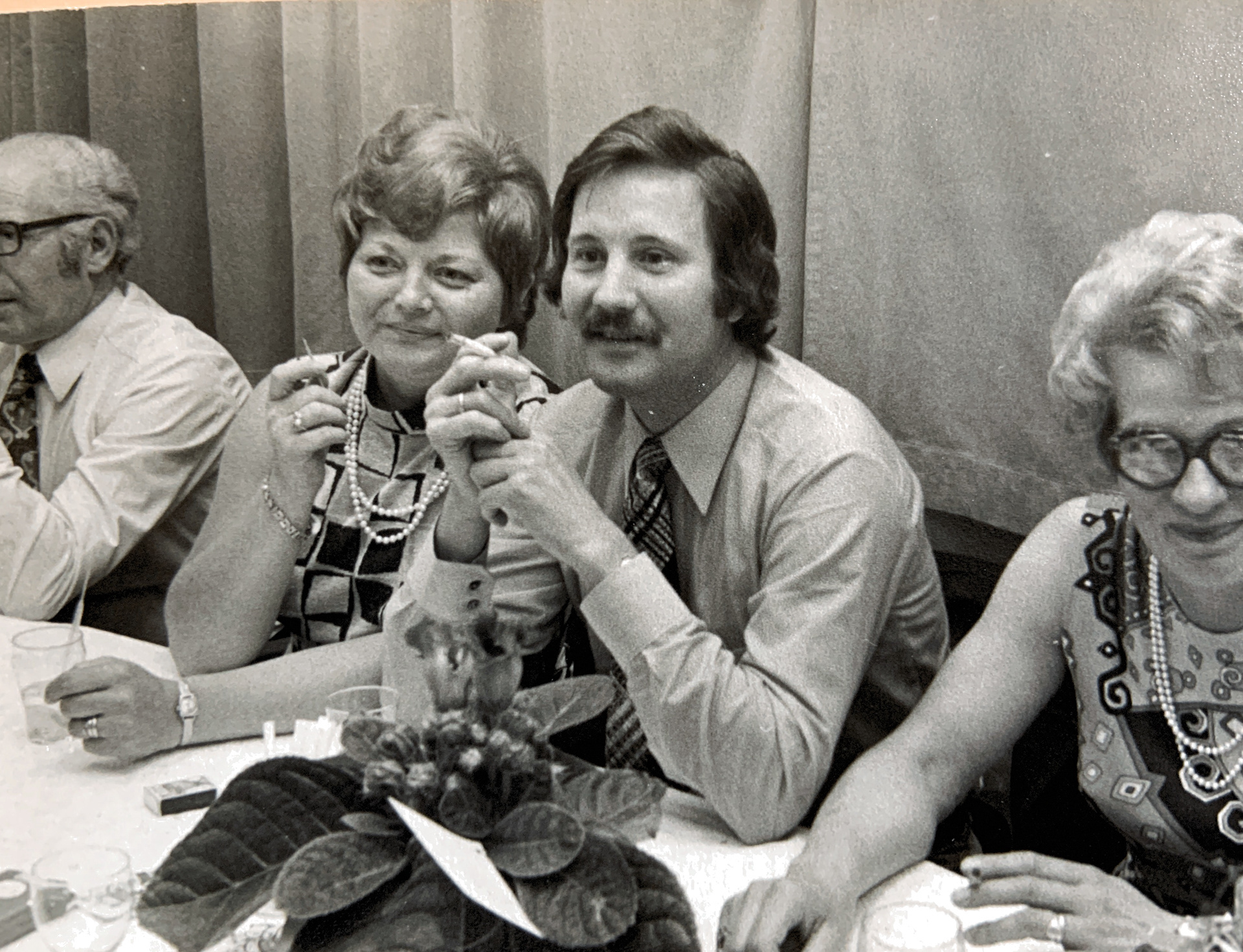 scroll down for English
JENNY LAMKIN/FLANEREN
1936-2020 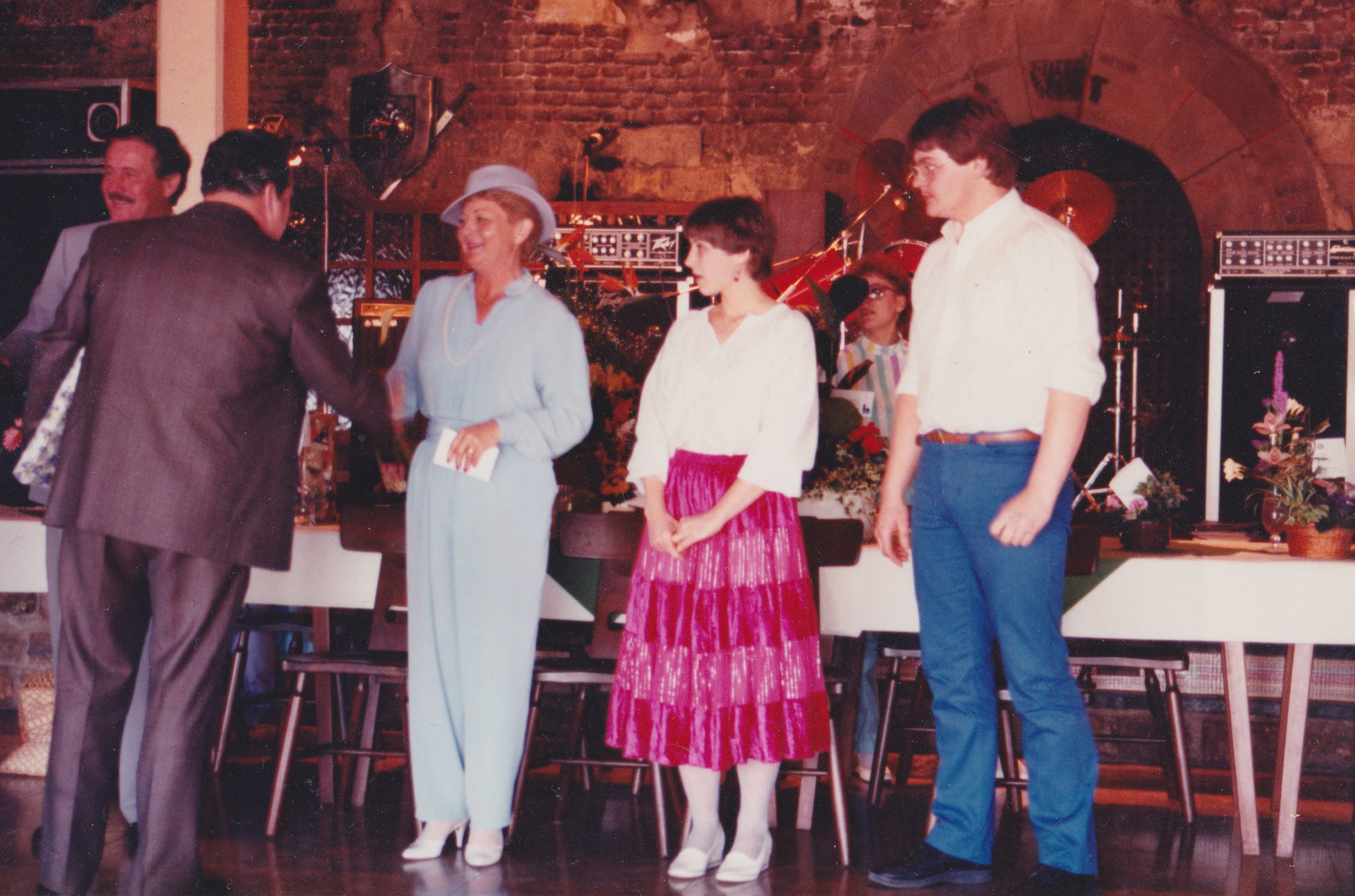 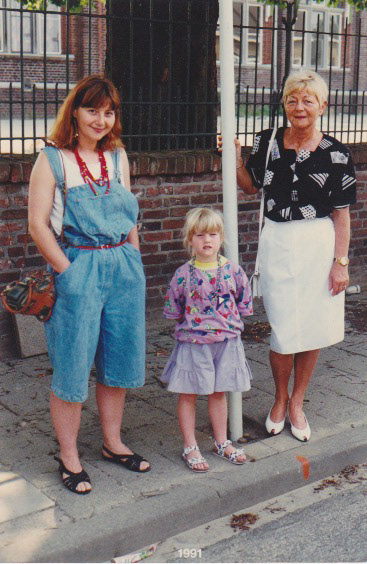 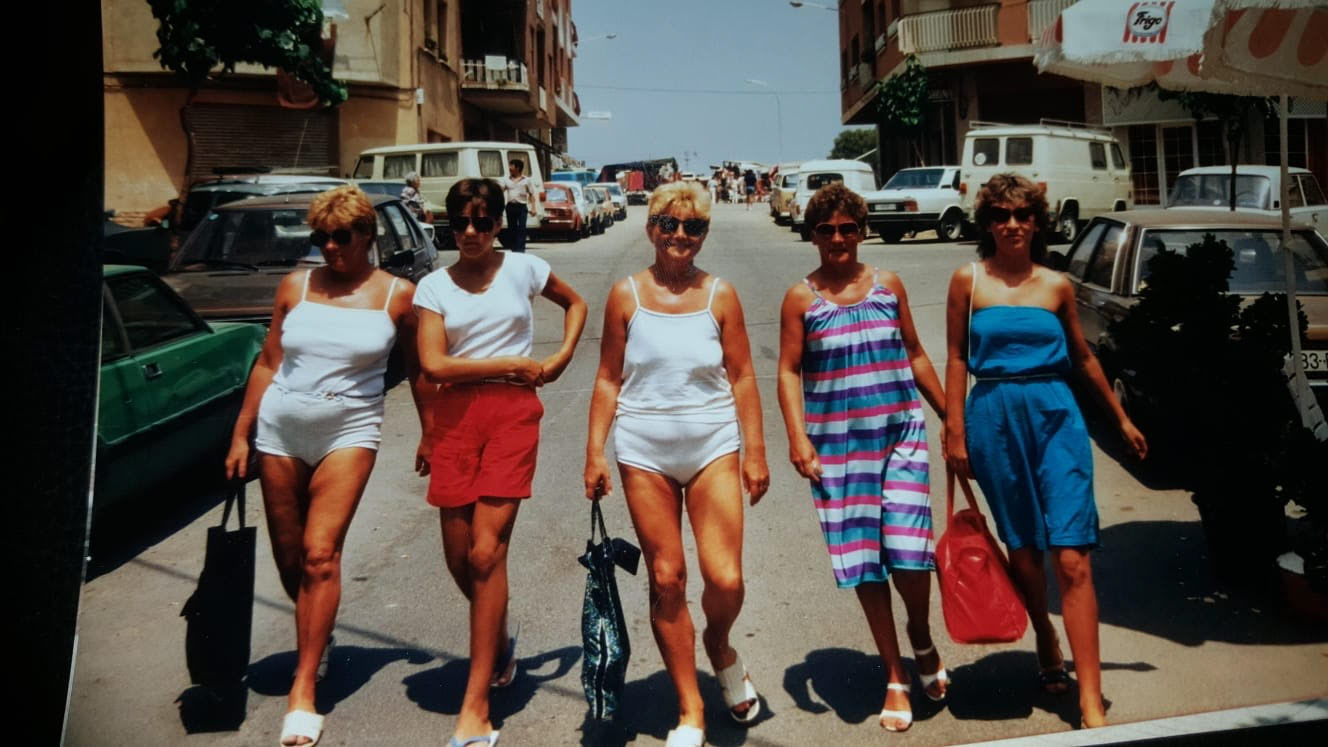 MAASTRICHT - The big bang of ‘Strolling in grandma’s clothes’ can be traced back to one grandmother: Jenny Lamkin. The idea originated with Jenny, Evi's grandmother. Every day she, her grandchildren and later even her great-grandchildren were passionately parading around in her clothes. Hopefully, soon you will too.
Grandma Jenny had a wooden chest of drawers with a white marble top in her house. The cabinet had two small drawers, filled to the brim with make-up. Often with bright red lipstick stored in beautiful boxes. Beneath those small drawers were two larger drawers containing shawls in various colors and patterns, bags that matched all of her outfits, and the occasional stray umbrella. Ideal for lingering around.
She didn't have such a well-stocked closet when she was growing up. When Jenny was two, her father died, and her mother was pregnant with her brother. They simply had no money during the war.
Hated It
Appearance was nevertheless very important: if you looked good, at least you didn't get any comments about it. Jenny was therefore trained as a seamstress, so that they looked good for little money.
She actually hated sewing, so when Jenny married Inie, the sewing machine quickly disappeared under lock and key. They were doing well financially. And it showed; suits, beautiful bags and pearl necklaces became part of her wardrobe. She was also a regular at the hairdresser and the beautician.
It wasn't until the grandchildren arrived that Jenny started to enjoy sewing again. The living room served as a studio and to determine the correct length, the grandchildren stood one by one on the large dark brown wooden dining table. Pins in her mouth, Grandma muttered instructions: "Stay still" or "turn around."
Large Underpants
For the most part, the suits stayed at home when she went on vacation. Then Jenny would rather walk around in - well, what do we call it? - a large pair of underpants. She would then wear clothes that she absolutely did not want to be seen in on the Maastricht streets.
What she didn't like at all were the white clogs, the Afghan coats and 'jute bag' skirts that daughter Meriam was wearing. There was always a fight about this. Meriam solved it by taking the clothes she wanted to wear from home in a plastic bag. She would change around the corner.
In recent years, because of dementia, Jenny was no longer herself. Appearance no longer mattered. Something that Jenny would have hated before she started suffering from dementia. When she went to the nursing home, her clothes and the 'tut-commode' were mucked out. Much had to go, but Meriam tried to save things by resewing them for daughter Evi. And that is still worn with great pleasure.
'Flaneren'
In the summer of 2020 we, Bobbine Berden - designer - and Evi - who works in journalism - sat down together. What can we do with this? Isn't it a nice idea to transform people's clothing into something new, to sell it and to ensure that part of the proceeds goes back to the elderly? And how nice is it to tell the stories behind those garments? Whose sweater, pants or skirt was it? This is how Flaneren in Oma's Kleren which translates to Strolling in Grandma’s Clothing, was born.
The first organization where ‘Strolling in Grandma’s Clothing’ shared the proceeds with is Hagerpoort, the nursing home where Grandma Jenny spent the last phase of her life. We have already received a lot of clothing donations and some of those stories are on this website.
Hopefully you will continue to follow us and every now and then you will find a piece of clothing that you want to flaunt in for years to come. Jenny liked to see people of younger generations in her clothes. She then felt modern and throwing it away is a shame. And we think so too!
Lots of love,

MARIA
↑Back to Top